When ꖝꔞꔒ [sic?] invented/formalised the ꕙꔤ script he and his assistants for some reason didn’t create numerals. Maybe they just didn’t think of it, as numbers could be represented in words.

Almost a century later numerals were developed for 0-9, but never caught on.

So… one evening I sat down and had a go at it myself. 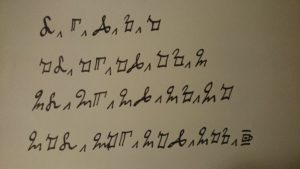 After a few attempts (sometimes inventing glyphs that already existed) I setteled for seven glyphs created by more or less combining the ones of the original words into one symbol, i.e. symbols for 1-5, 10 and 20 (as the ꕙꔤ  counting system is 5-, 10-, 20-based). To the right is the result and examples of how to use them.

For examples on how to count in vai Omniglot has a page based on Koelle’s Outlines.

This is the space where I will be documenting my attempt to learn the Vai language – both spoken and written – and the plan is to slowly transform it into the first(?) all Vai site on the web!
A grand plan that might take some time to finish.